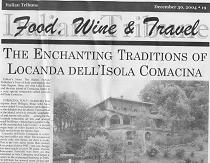 COMACINA, ITALY - As their tiny boat departs from Bellagio, those who have never visited Comacina have yet to discov- er the delights that lie ahead. Upon arrival at the island, which is virtually uninhabit- ed and serves only as the setting for the Locanda restaurant, an inn, and several small buildings, visitors have a grand view of the surrounding Lake Como - a pictur- esque body of water located in Northern Italy not far from the Italian Alps. Locanda dell'lsola Comacina is a din- ing spot unlike any other. The restaurant serves only one menu, six days a week. This is the very same menu that visitors have enjoyed since 1947 - not one change has been made in over 50 years. Owner Benvenuto Puricelli was born on the mainland in Sala Comacina and began a career in the restaurant business in 1963. He left Italy for several years, living and working at the Palace Hotel in St. Moritz, Switzerland; participating in the 2500th anniversary of the Persian Kingdom at Persopolis; and cooking as executive chef at the Penthouse Club in London. He returned to Italy in 1976, where he settled in Comacina and succeeded Lino "Cotoletta" Nessi as proprietor of the Locanda restaurant.

' The menu at Locanda is simple and nearly perfect, featuring typical, authentic regional dishes that vary only slightly with the seasons (the restaurant is closed every year from November 1 through March. 1). Every dish is all-you-can-eat, and a white D.O.C. wine is served with the meal. 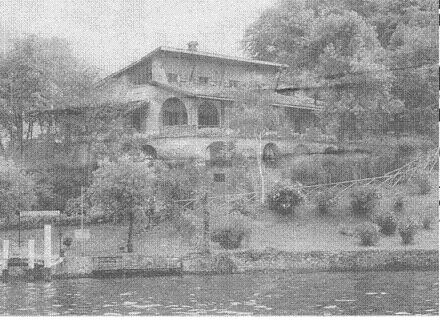 The first course is Antipasto all'Isolana. Each guest is served a slice of tomato, topped by a slice of lemon and seasoned with salt, oil, and oregano. Then, eight different fresh vegetables are paraded out of the kitchen - celery, carrots, baked onions, sweet peppers, courgettes, beans, broccoli, and French beans. Slices of Prosciutto di Praga and Bresaola della Valtellina (salted beef dried in special cellars) are heaped on a separate plate. For the second course, Trota alla Contrabbandiera, the chef serves fresh trout grilled on a hot plate over charcoal. The trout is boned and dressed at the client's table or in the kitchen.

Next is Rottami di Pollo in Padella, free-range chicken opened and "crushed," and then fried in an iron pot with oil. The chicken is served with salad. The fourth course is called Grana aIl'Escavadora - a simple chunk of famous Parmigiano-Reggiano cheese. At the table, a piece of the cheese is cut from the middle of the wheel and given into the hand of each dinner guest. For dessert, guests are served Arance alla Castellana. Oranges are sliced at the table and served in an exquisite ice cream called fior di vaniglia. The entire dish is covered with creme all'isolana. The type of fruit served varies seasonally, usually peaches are substituted. 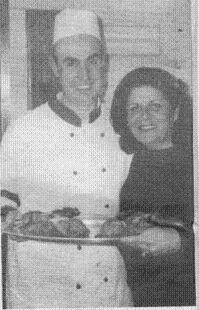 The meal's extraordinary finale is a Locanda tradition that is never broken. At the sound of a bell, Benvenuto himself enters the dining room adorned in a special wool cap. As he prepares the meal's finishing touch in a large, copper pot at the table - coffee with brandy - he explains the leg- end of the island of Comacina. According to local historians, the village of Comacina flourished and prospered even back during the period when the Lake Region was merely fjords of the Adriatic Sea. The Romans con- quered the village and its inhabitants moved south, where they founded the two villages of Como and Vico - which eventually joined to form the present city of Como. 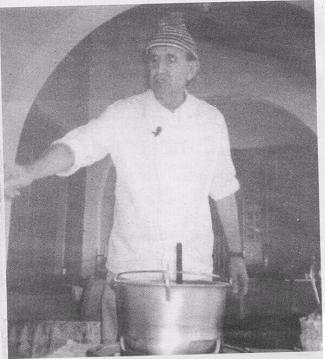 Greeks arrived after the Romans, and when the Roman Empire converted to Christianity the early pagan temples built on the island were consecrated as churches. The five original churches on the island became a refuge for Christians and served as a fortress for the people when the Barbarians, hoping to conquer the region, wreaked havoc on the surrounding area. At this time, the Christian refugees began to build homes on the island and Comacina took the name Cristopolis, or "City of Christ."

One of the refugees was the great Frandlione, who fled to the island during the invasion of the Lombards. He brought with him a horde of treasure that he had been able to save from the vandalism of the Barbarians, but the treasure was soon coveted by Aufharis, the husband of Theodolina, who directed his troops to besiege and conquer the island.

After six months of battle, Francilione surrendered to Autharis. Autharis granted peace and allowed Francilione to take refuge in Ravenna. The inhabitants of the island were spared massacre and were able to continue living on the land.

Throughout the years, numer- ous dethroned kings and princes settled in Comacina, which had come to be known as an oasis of peace. Even saints settled on the island, as the quiet village was a perfect place to lead a life of med- itation and prayer. Saint Abonde brought the Saint Euphemia cult to the island. Other religious iconic inhabitants include Saint Agrippa, Bishop of Como, and Saint Domenica.

Little by little, Comacina's power continued to increase. During the famous Ten Years War, the island became Milan's ally in a struggle against Como. The island was, however, journeying to ruin and in 1127 an unknown poet known as "The Anonymous Cumano" cursed the island with the phrase, "Island, cursed by thou throughout the ages!" Forty-two years later, Comacina was captured by Como, Queen of the Lake. Every fortification was destroyed, including the five churches and the island's castle. The inhabitants that survived the attack fled. Years passed and grass invaded the ruins of the island, which passed from one ruler to another until it became property of the Bishop of Como in 1196. Later., Cardinal Durini attempt- ed to recover Comacina from abandonment and turn it into a sort of earthly paradise. His noble quest failed.

Much later in 1911, Auguste Caprini of Sala Comacina purchased the last lot of land on the island, thus becoming the sole owner of Comacina. Upon his death, he bequeathed the land to King Albert I of Belgium. The little island was sacrificed with painful emotion during the sad years of World War I, but after the war Comacina was rightful- ly returned to Italy. In 1927 a royal decree placed the island under the rule of Princess Marie-Jose, daughter of Victor-Emmanuel III.

By this appointment, Comacina came to be governed by two commissions. The first, headed by the Minister of National Education and the Belgian ambassador, had its seat in Rome. The other, with its seat in Milan, was governed by the Fine Arts president and the Belgian consul, which proposed building homes on the island for Belgian and Italian artists. After the intervention of Eugene Brenna, the mayor of the island, three houses by the architect Pierino Lingeri were constructed.

Unfortunately, World War II prevented the completion of the project and the houses remained abandoned. It was only recently that the structures could reassume their initial role, with help from the architect Paolo Candiani, President of the Fine Arts Academy.

An inn was completed during the mid-20th century, and since 1964 has offered peace to visitors. The flags of Italy and Belgium still fly outside the building. Today, Locanda restaurant owner Benvenuto continues to practice mysterious fire rituals to ward of the mysterious curse of The Anonymous Cumano.

Most recently, George Clooney, Brad Pitt, Julia Roberts and the rest of the cast of Ocean's Twelve visited Lake Como and Comacina after the completion of the film. Their photos, along with photos of numerous other celebrities who have visited throughout the years, adorn the walls of the Locanda restaurant.

For more information, contact Locanda dell'Isola Comacina by phone at 0344.55083 or by visit- ing the web site at www.locanda-isola-comacina.com. The restaurant is located at 22010 Sala Comacina, Lago di Como.. 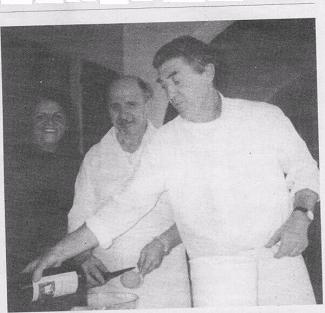 CHEF ANTONIO OSTINELLI of Locanda dell'Isola Comacina presents the third course of his specially prepared dinner, Rottami di Pollo in Padella. He is pictured here with Marion Fortunate, wife of Italian Tri- bune Publisher Buddy For- tunato, who recently enjoyed a meal at the restaurant during the Italian Tribune Tour of Italy. Locanda, located on the island of Comacina, Italy, has been serving the same menu, six days a week, since 1947..

LOCANDA DELL'ISOLA COMACINA, one of northern Italy's best eateries, is nestled on a gorgeous island in the middle of Lago di Como, Italy. The tiny island of Comacina is shrouded in local legend, having been cursed in 1127 by a mysterious poet, and since surviving numerous sieges and conquests throughout the years. Today, visitors to the island are enchanted by its beauty and by its haunting past..

BENVENUTO PURICELLI, second-generation owner of the Locanda deU'lsola Comacina restaurant, is pictured during the end- of-dinner ritual. Adorned in a distinctive woolen cap, Puricelli recounts the legend of the mysterious island as he whips up an after dinner coffee for his guests after a symbolic ringing of the bell.

MARION FORTUNATO hopes to pick up some culinary secrets from the chefs at Locanda dell'Isola Comacina as they prepare a fantastic dessert tableside. The dish, Arance alia Castella, consists of fresh oranges,/for di vaniglia ice cream, and creme all'isolana liquor. Who knows, the dessert may just show up on a future Fortunatos' holiday table!